Episode-04: Cognitive self defense against a psychopathic technocracy 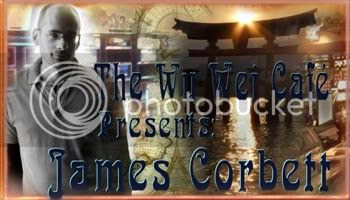 My special guest for this episode is James Corbett of the Corbett Report.

The Corbett Report is single handedly edited, webmastered, written, produced and hosted by James Corbett. James Corbett is an independent journalist who has been living and working in Japan since 2004. He has been writing and producing The Corbett Report, an online multi-media news and information source, since 2007
The Corbett Report is an independent, listener-supported alternative news source. It operates on the principle of open source intelligence and provides podcasts, interviews, articles and videos about breaking news and important issues from 9/11 Truth and false flag terror to the Big Brother police state, eugenics, geopolitics, the central banking fraud and more.
James and I dive deeply into a meta-analysis of the topics of social engineering, social alchemy and other forms of the prestidigitation used by the masters of manipulation that many call the New World Order, or the powers that be, or simply just the control system. I prefer to call it a pernicious influence that has infected human consciousness like a virus.James and I attempt a diagnoses or at least an assessment of the nature of this pernicious influence. As well as analyzing how our own psychology is used against us. Understanding ourselves better may be the best form of self defense against this psychopathic technocracy. Dialogue like this may help to bring human consciousness closer to understanding and awareness. Clarity and awareness may be, if not the cure itself then at least a significant enough boast to the our immune system to force the parasites to leave the host.

This work is licensed under a Creative Commons Attribution-NonCommercial-ShareAlike 3.0 Unported License.

Special thanks to Jamendo.com and CCmixter and the generous musicians who donate their wonderful music to the  Creative Commons community.
http://ccmixter.org/
http://www.jamendo.com/en/

Links to all the musical artist featured in this podcast are listed bellow:
KENE BUSMA

"A Billion Years Of Green"

http://www.hisboyelroymusic.com/
Posted by Unknown at 5:38 AM

The Wu Wei Café is a creative construct of the mind. An interesting little cafe found along the path where human consciousness expands beyond self-awareness and begins to commune with the ultimate reality. The Wu Wei Café sits humbly waiting to be discovered. This is just the kind of place to find bold psychonautic explorers and adventurous seekers of extraordinary states of perception. A cool hangout for the intellectually brave and the preeminently curious.

So come in and hangout as we contemplate the sublime, exquisite and infinite beauty of the omniverse.